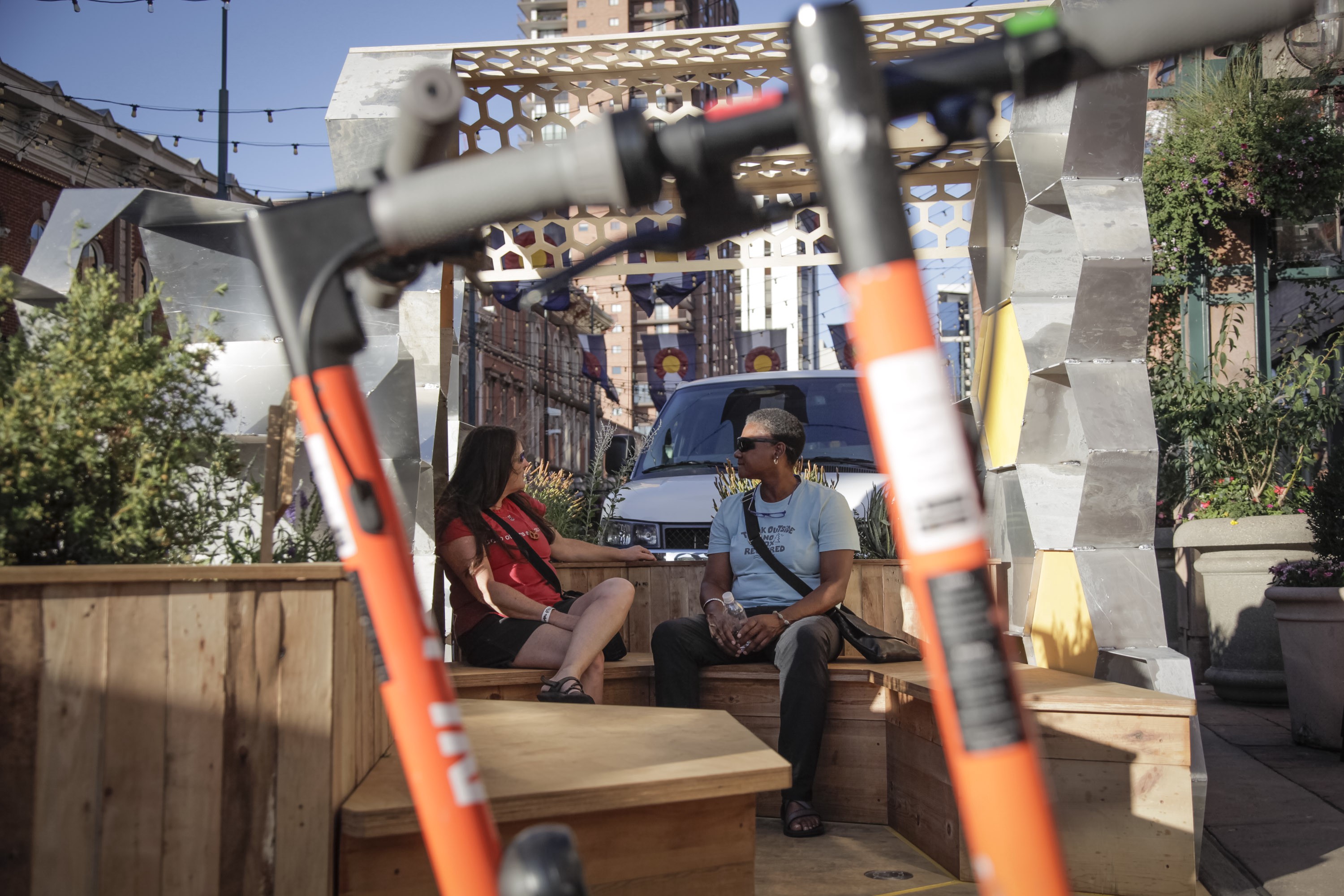 Pictured above is one of the six parklets created for the Spin Spot competition. With its hexagonal structure, The Hive is an ode to the urban beekeeping movement which Denver legalized in 2008.

It’s a simple recipe. Take one or two curb-side parking places outside a cafe or restaurant. Remove the cars. Add comfortable seating, some trees, lighting, and local artwork for some color and ambience, maybe a table or two. Sprinkle in people, and voila! You’ve turned an underutilized slab of asphalt designed to store a single car for hours at a time into a vibrant parklet where people can meet and chat over drinks, games, and food.

Just a few months ago, we put out a challenge to urban designers: could they creatively — and inexpensively — transform car parking spaces into places for people to gather and build community? In partnership with Better Block Foundation, City of Denver Department of Public Works, Denver Streets Partnership, and Downtown Denver Partnership, Spin sponsored the first-ever parklet competition focused on shared micromobility.

The competition culminated in a showcase on National Park(ing) Day this past September. Six finalists — out of dozens of submissions from around the world — were chosen and given the budget to build their designs in Downtown Denver and demonstrate to passers-by just how transformative these simple structures can be.

Participants fabricated their designs at the University of Colorado-Denver’s Inworks facility.

The People’s Choice prize went to The Hive. Their parklet incorporated planters, lighting, and benches. It also included a honeycomb-shaped barrier on the street-facing side and a canopy where photovoltaic panels could be installed to sustainably power the scooter charging corral at the other end of the parklet.

The Urban Backyard transforms a parking space into a suburban patio where people can socialize and play a game of checkers.

Similarly, the winner of the Judge’s Choice prize, Urban Backyard, built a space where people could comfortably wait for public transit. The Urban Backyard incorporated a small street-side opening from which people could board a bus. It also had space to comfortably pass the time, with a table, seating, and games. And, of course, a scooter corral.

Parklets are about “reclaiming spaces for people,” Krista Nightengale, managing director at Better Block Foundation, a safe streets group that helped facilitate the building process for the finalists. “We have all this space set aside for our vehicles, but what about us?”

Better Block aims to make these types of street improvements easy to replicate and tailor to the specific needs of different cities, offering simple design plans through their website.

“We wanted to make it something everybody could do,” Nightengale said.

The benefits of parklets are clear: they invite more people out of their cars, generating more foot traffic for local businesses. This means more customers than the potential patrons occupying a single parking spot. Parklets also discourage drivers from speeding, while breaking up long blocks and adding life to the sidewalk. And, in this age of micromobility, these parklets can also incorporate parking and charging of dockless e-bikes and e-scooters, helping to keep sidewalks clear and address concerns about where people park e-scooters in busy thoroughfares.

And the idea isn’t new. When Dallas launched its bikeshare program several ago, Better Block designed a parklet that would incorporate bike parking.

As part of Denver Park(ing) Day, Walk Denver created a series of spaces for people to eat lunch, relax and read a book. (Photo is courtesy of Walk Denver)

That vision is very much in line with the future that Andrew Iltis, Downtown Denver Partnership’s senior manager for transportation and mobility, imagines for his city’s bustling core. Park(ing) Day “fits right into that big vision of creating a downtown that is more human scale and more accessible by active modes and micromobility.”

Since the demonstration in September, Iltis said, he’s already got several business owners interested in creating more permanent parklets adjacent to their businesses. Particularly, they like the idea of incorporating charging stations for e-scooters, he said, because businesses “don’t always want people driving.”

The Dairy Block — a historic block in the heart of Downtown Denver with dozens of restaurants, shops, and bars, plus a hotel and a coworking space — is ready to move forward with plans for a more permanent parklet, he said.

“We believe in creating a really great place for people to be,” Iltis said. And, he was excited to find a willing private sector partner in that goal. “Because we are a nonprofit, we aren’t flush with cash,” he said. “How can [these micromobility companies] demonstrate they are helping the city to achieve those larger mobility goals?”

Events like these “show we can have healthy relationships with” micromobility providers to help further the environmental goals of the city.

“In order to get to the behavior change we need to reduce reliance on single-occupancy vehicles, we need really consistent transportation modes,” he said. Last year, nearly 40 percent of people visiting Downtown Denver came on transit and 10 percent came on bike. That was before the explosion of micromobility options.

Car-free or car-lite downtown areas are increasingly popular around the world. And the positive impact of people-oriented infrastructure has been pretty clearly documented.

The impact of dockless mobility options will be measured in Denver in a forthcoming survey, Iltis said. If other cities are any example, though, the introduction of e-scooters will likely have only further reduced people’s dependence on driving. Over the course of the last 12 months, the city of Santa Monica saw nearly half of the 2.7 million trips taken on e-scooters replace car trips.

The competition challenged participants to incorporate micromobility parking and charging into their designs.

Officials at Denver City Hall, who put on their own Park(ing) Day displays in September, are also excited about the future of people-oriented streets in the city.

“Denver loves parklets because they provide opportunity to repurpose space in an exciting, engaging way. The public deserves to have more space that’s communal, aesthetically pleasing, and safer for all,” Ryan McCann, On-Street Program manager for Denver Public Works, said in an email to Spin.

“In the future, Denver will continue to celebrate the international annual event, Park(ing) Day and explore a permit program that supports creative-new uses. We look forward to seeing what the community can imagine for parking spaces in the future,” he said.

The impact of the Denver parklet competition has already been felt in other cities.

Upon returning home to Kansas City, DuRon Netsell, from the Urban Backyard Team, found that the Denver competition had generated a lot of enthusiasm for parklets in his city.

“Sharing our design we did for Spin created a lot of excitement,” Netsell said. “Within a few days of coming back home, we were doing news interviews.”

As a result of the parklet publicity, the City Council is now considering an ordinance that would make parklets legal in Kansas City.

Netsell sees the proliferation of e-scooters as a boon for changing the way people get around cities and imagine public spaces.

Scooters “moved us forward a decade almost overnight” in the movement to bring back walkability to our cities, Netsell said. “We’re at the beginning stages of a mobility revolution.”