Knitting communities back together with safer streets in Salt Lake City 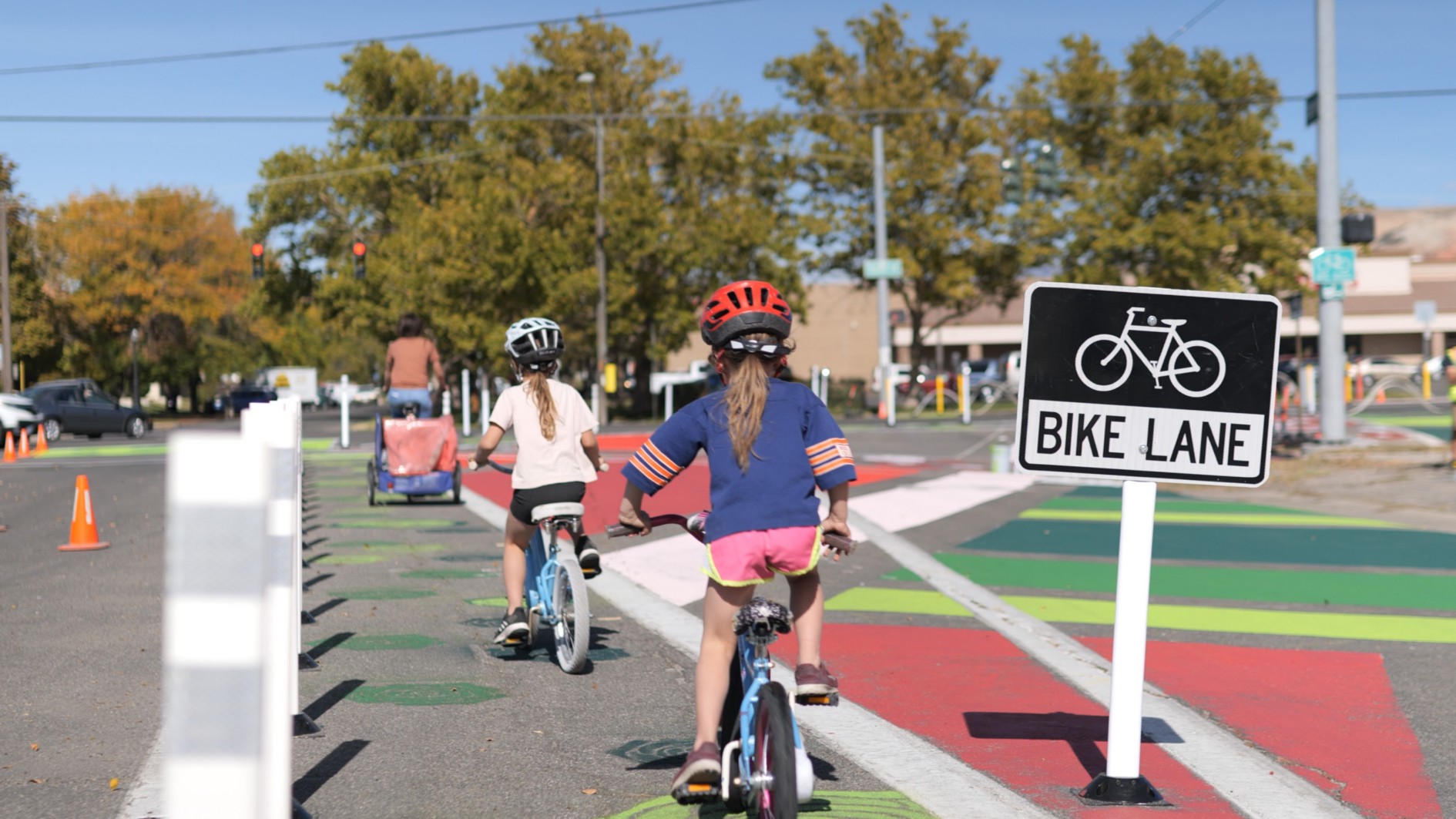 How do you transform a neglected and dangerous stretch of road into a space that works for the community? For starters, you have to talk to the people who live there.

That was the starting point for Salt Lake City officials when they set out to start planning to improve 600 North corridor, an overly-wide road between the historically under-resourced neighborhoods of Fairpark and Rose Park on the west side of the city. While the 600 North corridor is a major connector of several neighborhoods, it is generally hostile to modes of transportation other than cars.

A better designed streetscape could make it safer to cross the corridor or to travel along it by bike or scooter. It could also slow down car traffic coming off the corridor into the neighborhoods.

In partnership with Spin, the City, and the local Community Councils, on a sunny autumn day in October residents were able to test out first hand some of the street designs that could help make the street near their homes safer for all.

Making streets safe for everyone to use is an essential step to getting people out of their cars and into more sustainable modes of transportation like bikes, scooters, walking, or rolling.

This isn’t Spin’s first time supporting community-oriented safe streets projects in Salt Lake City. Last year we partnered with community organizations and residents to transform an intersection with paint, some planters, and temporary bike lane delineators to demonstrate how easy it can be to reclaim streets for people. This project builds on that assumption.

From the initial planning meetings with the community to putting paint on the ground, the process took four weeks, noted Kyle Cook, a transportation engineer with the City. The build out is temporary, but being able to plan and put something on the ground quickly, collaboratively, and efficiently was the point.

Dozens of residents of the Rose Park and Fairpark neighborhoods, including enthusiastic children, turned out on a sunny day in early October to help put the paint on the ground that delineated safe crossing areas, a buffered bike lane, and a more fun, people-oriented street.

“I’m really glad that the city has decided to focus on this,” said Kevin Parke, chair of the Rose Park Community Council. “It really says something that the City is focused on this and I can’t give enough props on how this has been organized.”

Parke is a 21-year resident of Salt Lake City. He lives not far from the project and noted that he has been a long-time supporter of making the streets safer for the community. And the Community Council is always “looking for ways to improve our community,” he said, from community clean ups to improving neighborhood markers.

The 600 N Corridor study is particularly important, Parke said. “This corridor is unique. It’s busy [and] people come off of that off ramp and continue to speed.” Just a mile up the way, he said, there have been several people killed while crossing the street in the crosswalk as a result of people speeding off of the corridor and into neighborhoods. On a personal note, Parke said that his two daughters were involved in a car crash along the corridor. Though, fortunately, no one was injured, he said, it goes to show the need for safer street design.

He also said that his son, who is still too young to drive, volunteers at a nearby recreation center and often gets there on a Spin scooter. He noted that improvements like these help make sure the ride is a safer one.

Too often, improvements that make streets safer and more welcoming to the community around them can be very expensive, feel like they are being imposed on the community from above, and take forever to actually get built. Residents don’t get to really experience just how impactful some of the fixes can be until after the project is done — sometimes years after it is first proposed.

After hearing from people in the community about concerns over speeding vehicles and unsafe crossings, the team got to work creating fun designs that would encourage slower speeds, shorten the distance people had to go when crossing the street, and planning protected bike lanes that also kept people walking safe from traffic.

The project also represents an investment in a part of town that has historically seen a lack of investment.

“I think sometimes people give this area a not good rap but good people live here and I think it’s good to brighten up the community and give our people a chance to contribute to that,” said Mina Milicevic, who lives in the neighborhood with her husband, Spin’s senior operations manager in the area.

The final improvements will still take some time before they are installed. This project was meant to give people a preview of how the space could be reimagined.

“This is like a really awesome billboard,” said Cook, “a live, interactive billboard that introduces people” to what could be. “In some ways this was less about the installation itself and more about getting people energized and enthusiastic around the corridor plan,” he said.

Sullivan agreed. “The community members can see what happens when you shorten the crossing, when you calm traffic, when you are representing the neighborhood in the street art.”