Ladybirds, ash trees, and herb gardens: transforming parking spaces in Lewisham into a space for people 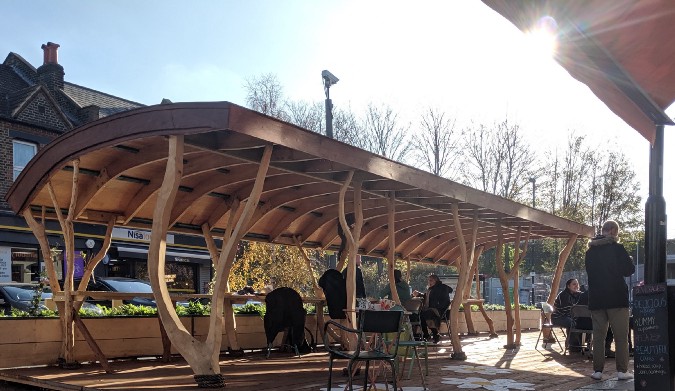 Over the course of the last month or so, residents of Lewisham watched as nine parking spaces in front of a row of local businesses were transformed into London’s largest parklet, made from reclaimed wood and featuring an herb garden, murals, and seating.

The project — called “The Arc” — is Spin’s second collaboration with Joel De Mowbray, who runs YesMake, a community-focused urban design shop. “The Arc” is also Lewisham’s first parklet, a small park that replaces underutilized streets space — in this case, the nine parking spaces — and turns them into an inviting outdoor seating area where people can safely socially distance while enjoying food and drink from one the numerous nearby restaurants or cafes. “The Arc” builds off the success of Spin’s collaboration with De Mowbray for the Atlantic Road project at Brixton Market. There, De Mowbray worked with a local upcycling shop to repurpose wooden pallets to extend the pavement, creating more space for social distancing while still shopping at — and supporting — local businesses.

As part of the UK government’s Streetspace for London initiative, Lewisham Council had suspended the parking along the north side of Staplehurst Road in order to facilitate more social distancing, De Mowbray said, but “a lot of people didn’t fully understand why or who to activate the space.”

The white-and-orange barriers put up to cordon off the area from vehicles led some to think that it was blocked off for some sort of public works or construction project.

With winter approaching, it was also clear that for the space to be usable as support for the local businesses, it would need to provide some shelter from the wind and rain.

Building off of the foundation — both literally and figuratively — of the Atlantic Road project, De Mowbray designed “The Arc,” named for the curved roof that shelters the main seating area on the 26-by-5 meter platform.

“We hope that this new parklet will help with social distancing and allow local businesses to serve more customers in a COVID-secure way,” Lewisham Councillor Sophie McGeevor said, noting that this project was made possible with the help of Spin and the work of De Mowbray’s organization, YesMake.

“Making streets safer, more accessible, and generally more livable for people is the underlying goal of Spin’s Streets program, whether you ride a scooter, a bike, or you walk,” said Kay Cheng, director of Spin’s Streets program. She and her team help facilitate the partnership with YesMake on this project. This isn’t the Streets team’s first foray into parklets, either. Last year, Spin put on a first-of-its-kind parklet competition in Denver where six finalists from around the U.S. were challenged with building out their parklet designs in parking spaces in the city’s Downtown to showcase just how quickly and efficiently empty parking spaces could be transformed into oases for people.

De Mowbray’s design for “The Arc” deliberately evokes an organic feel. The supports for the roof are fashioned from the branches of several ash trees which fell naturally during the summer storms near his father’s house, De Mowbray said. Arthur De Mowbray, De Mowbray’s father and artisan in his own right, helped Joel with the construction of “The Arc.”

Around the edges of the parklet, local artist and florist Harriet Parry Flowers planted a mix of herbs, ferns, and grape plants in planters. Local artist collective, This Is My Costume, decorated the parklet with murals and art meant to engage children.

De Mowbray said that the art includes dozens of painted ladybirds that children can seek out and count as a game. There is also a large painted bumble bee and a dotted line representing its flight path that children can run on. At least, once the most recent lockdown is lifted.

Initially, some of the locals were skeptical about the project, but over the short time building out the parklet — and chatting with passers by — De Mowbray said, people have really come to like it.

“Because this happened really quickly, there were folks who were put off by the speed at which it was happening,” he said. “People who had the biggest concerns are our biggest ambassadors now. I totally understand their concerns. Up until that point, we hadn’t built that trust, but now we have.”

The UK announced a four-week lockdown shortly after De Mowbray finished up work on the project, which means the local businesses in the area are currently closed, but once it is safe to reopen, the parklet will be an ideal outdoor space to sit and eat, enjoy a drink, or just socialize with friends and neighbors while observing social-distancing protocols.