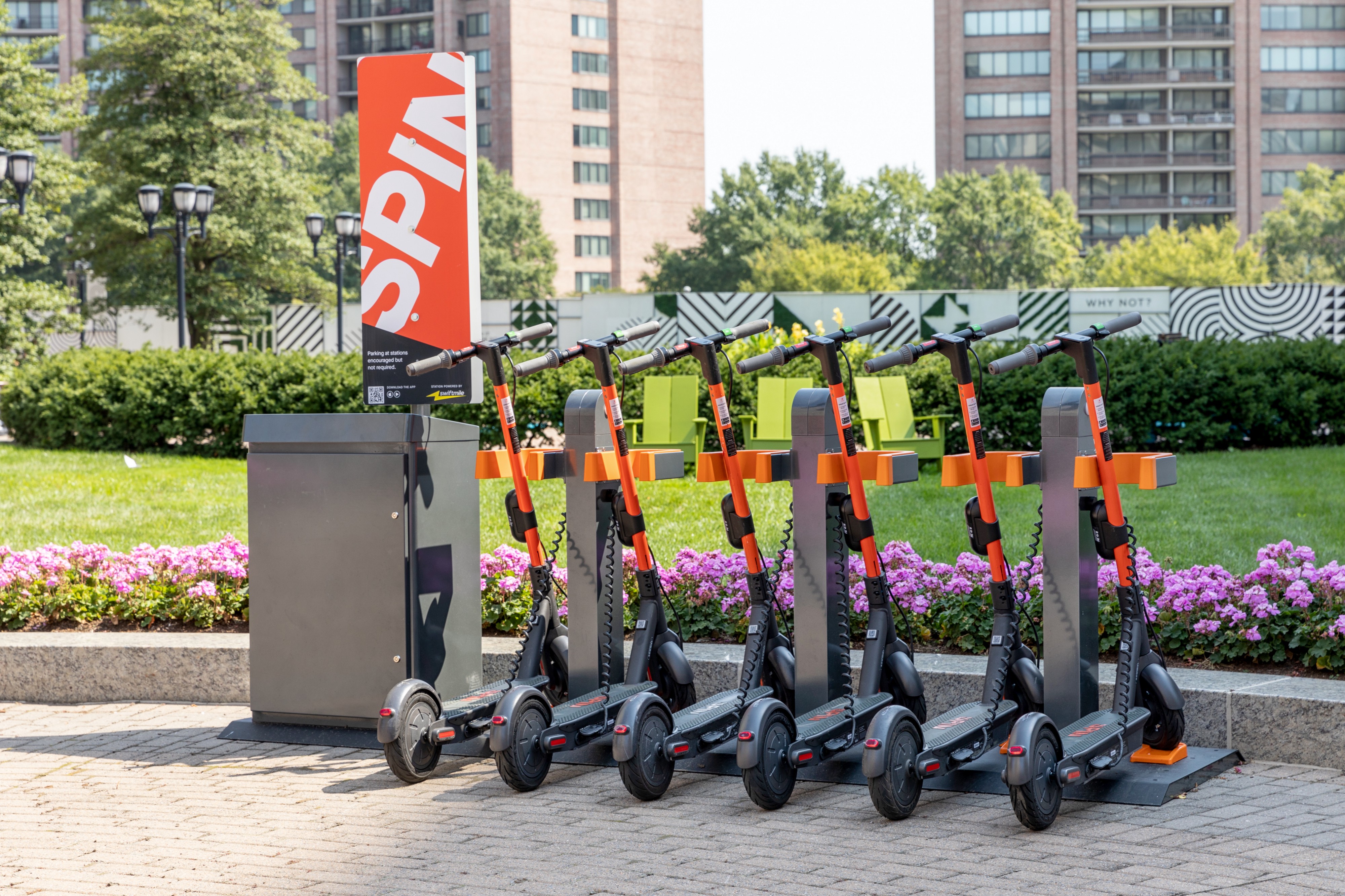 Keeping sidewalks clear and e-scooters neatly parked is an important part of being a good partner. That’s why Spin is constantly working on ways to improve the ways we keep scooters organized in the public right of way when they aren’t being used.

Our partnership promise means we work closely with the cities where we operate to understand the challenges facing the maturing shared micromobility industry and to come up with sustainable solutions. With the industry now in its fourth year of widespread operation in the US, we are proud of the work we’ve done to tackle sidewalk clutter.

The fundamental issue is that our streets are designed first for moving and storing cars, which leaves little space for all the other modes of getting around. Spin actively works with cities and organizations to make the case for more people-oriented street design as a long-term solution to issues like sidewalk clutter, but in the meantime, we are also taking steps to make sure that the services we provide improve mobility and access for people without hindering it for others.

Over the past two years, we have invested in Spin Hubs. Roughly the size of one or two car parking spaces, Spin Hubs are docking stations that give riders a clear place to park — and charge — their scooter at the end of their ride, helping keep scooters neatly parked and out of the sidewalk.

In 2019, Spin installed about 40 Spin Hubs in DC and surrounding areas in northern Virginia. Spin as part of our goal to address sidewalk clutter by making space for riders to orderly dock their scooters at the end of their rides.

Last year, through our partnership with the City of Phoenix, we installed our first Spin Hubs in the public right-of-way.

“I am thrilled to see Spin expanding their presence, by adding much needed charging and parking stations in downtown Phoenix. It’s great to have Spin as part of the city’s e-scooter pilot program, which is helping residents and visitors enjoy downtown by improving accessibility and providing alternative modes of transportation,” said Phoenix City Councilmember Michael Nowakowski.

We also partnered with Creighton University in Nebraska and The University of Central Florida in Orlando to begin installing charging hubs throughout the campus. Additionally, we installed our first solar-powered Spin Hubs on Edwards Airforce Base.

Spin Hubs work best when combined with other infrastructure that adds to the livability of the streetscape, like parklets, seating, or lighting.

The Preferred Parking Spots feature has significantly helped reduce sidewalk clutter in other cities. In Cleveland, for example, before we introduced the Preferred Parking Spots feature, Cleveland had experienced issues with riders leaving scooters wherever was convenient for them, leading to sidewalk clutter issues. After the introduction of the feature, we see riders successfully park their scooters in a preferred area 20 percent of the time.

Since seeing success in Cleveland, we’ve added the Preferred Parking Spots feature in several cities. We have more than 100 of these spots in Washington D.C. and 100 in Miami as mentioned above, the majority of which line up with parking corals designated by city governments. This feature compliments our Spin Hubs in cities where we have them since it allows us to further incentivize riders to use the hubs at the end of their ride.

This builds on other in-app solutions we have been using for some time, including the requirement that all riders take a picture of their scooter before they are able to end their ride and a feature that requires people to rate the parking job of the scooter before they unlock and start their ride. Both features are designed to give riders some level of accountability for how they leave their scooters after they are finished using them.

We also direct riders to our Spin Safe course, which is a comprehensive online resource that reminds riders about all the different aspects of safe riding and parking of scooters.

Spin’s new S-200 scooter is equipped with cutting-edge vision technology from our partner Tortoise, which allows us to remotely operate Spin’s fleet and automatically re-park scooters out of the pathway of pedestrians and other sidewalk or street traffic within seconds. Named Spin Valet, we announced the technology earlier this year and have begun piloting it in Boise, Idaho. We look forward to rolling out this technology in more markets over the course of this year.

Every year, we see cars equipped with increasingly sophisticated sensor systems designed to increase driver visibility and awareness of their surroundings. We are working with Drover to apply similar technologies to combat scooter clutter and sidewalk riding.

This year, Spin scooters in some markets will be equipped with Spin insight powered by Drover, which includes cameras, sensor arrays, and onboard computers to help the scooter become “aware” of where it’s being parked. The technology will be able to alert our operations team if the scooters are blocking access or otherwise improperly parked so they can respond quickly to correct parking mistakes.

In particularly dense urban areas, we have had success using lock-to devices as a way to reduce sidewalk clutter.

In very specific situations, we have found that requiring users to lock their scooters to a bike rack or other designated infrastructure has shown a reduction in scooter clutter. Chicago Department of Transportation commissioner Gia Biagi stated after the pilot program in that city that Lock-To requirements “significantly reduced the number of instances of devices blocking sidewalks.”

Lock-to has limitations, too, and infrastructure improvements like micromobility hubs combined with parklets are better long-term solutions, but in particularly high-traffic and dense areas, lock-to has worked to help keep sidewalks clear.

There is no silver bullet solution to addressing concerns like sidewalk clutter. That’s why we tackle the problem from multiple angles, offering technological, infrastructure, and hardware solutions. As the industry continues to mature and cities invest in micromobility as a more permanent feature of their transportation networks, we will continue to work closely with all our partners to integrate e-scooters into the urban fabric as seamlessly as possible to ensure micromobility works for all residents, even those who do not use the services. 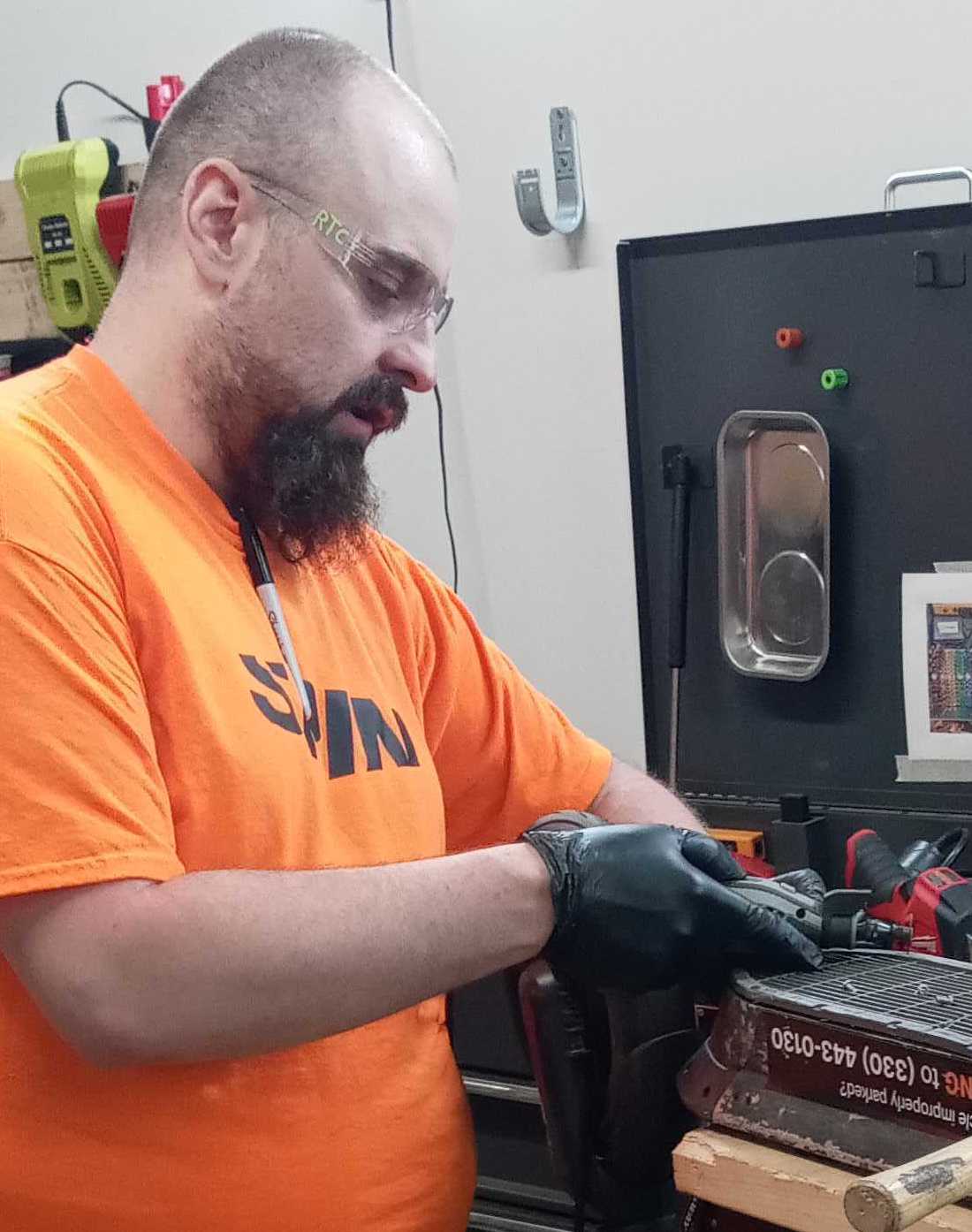 Safety
Spin’s Commitment to Safety Starts in the Workplace 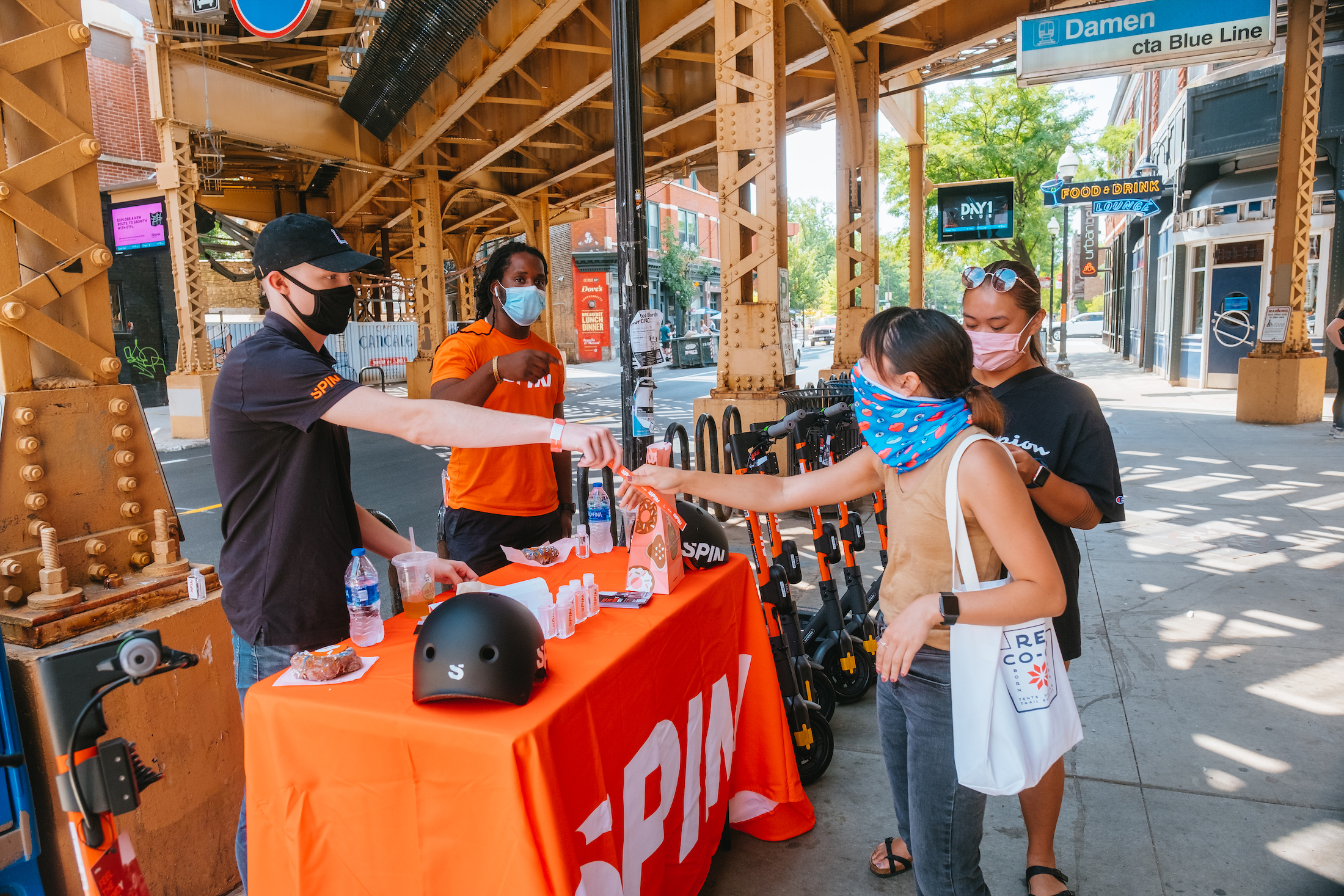 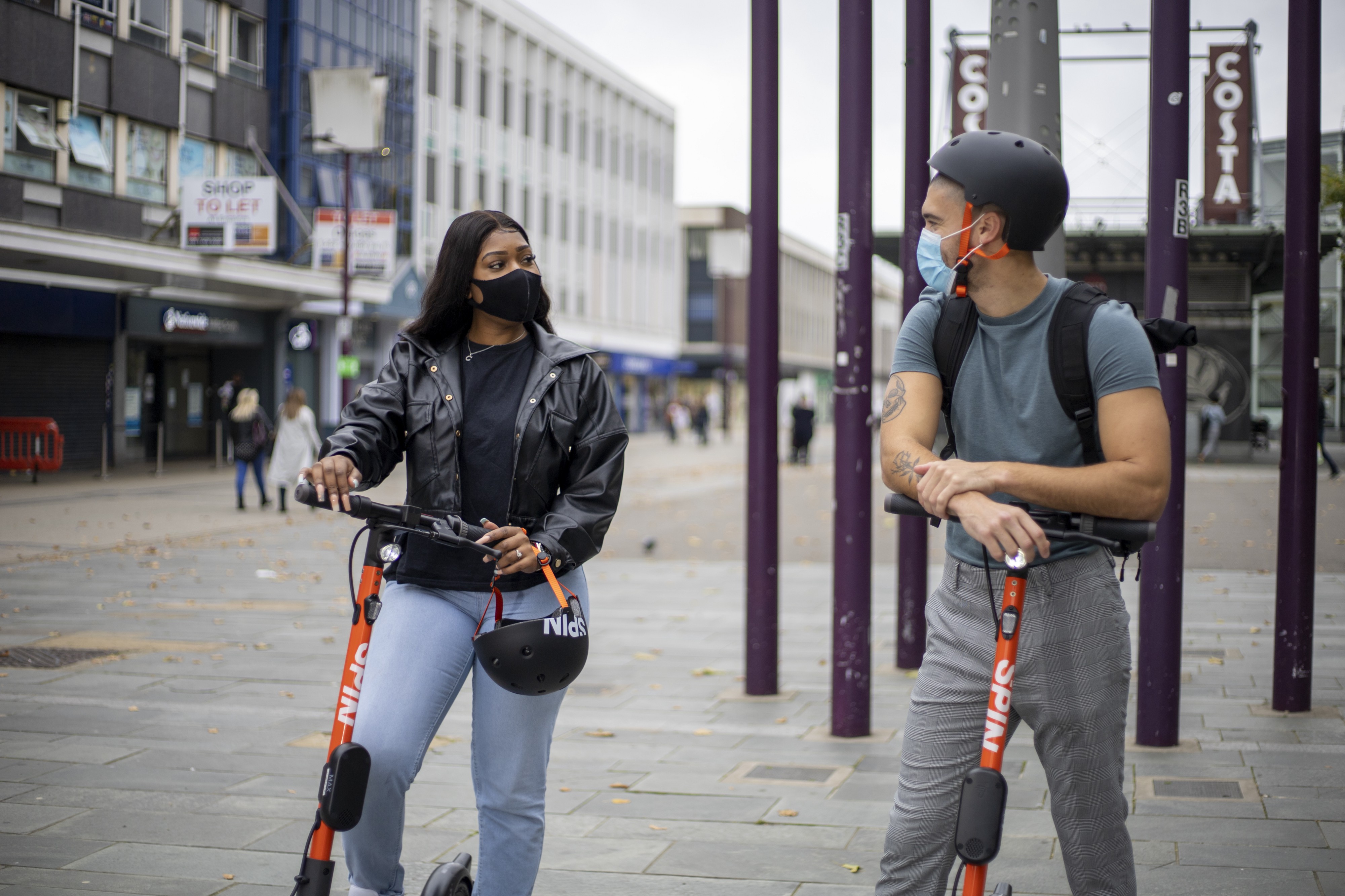 Safety
UK E-Scooter Trials: Steve Pyer on the Spin Approach to Safe Riding
Back to blog