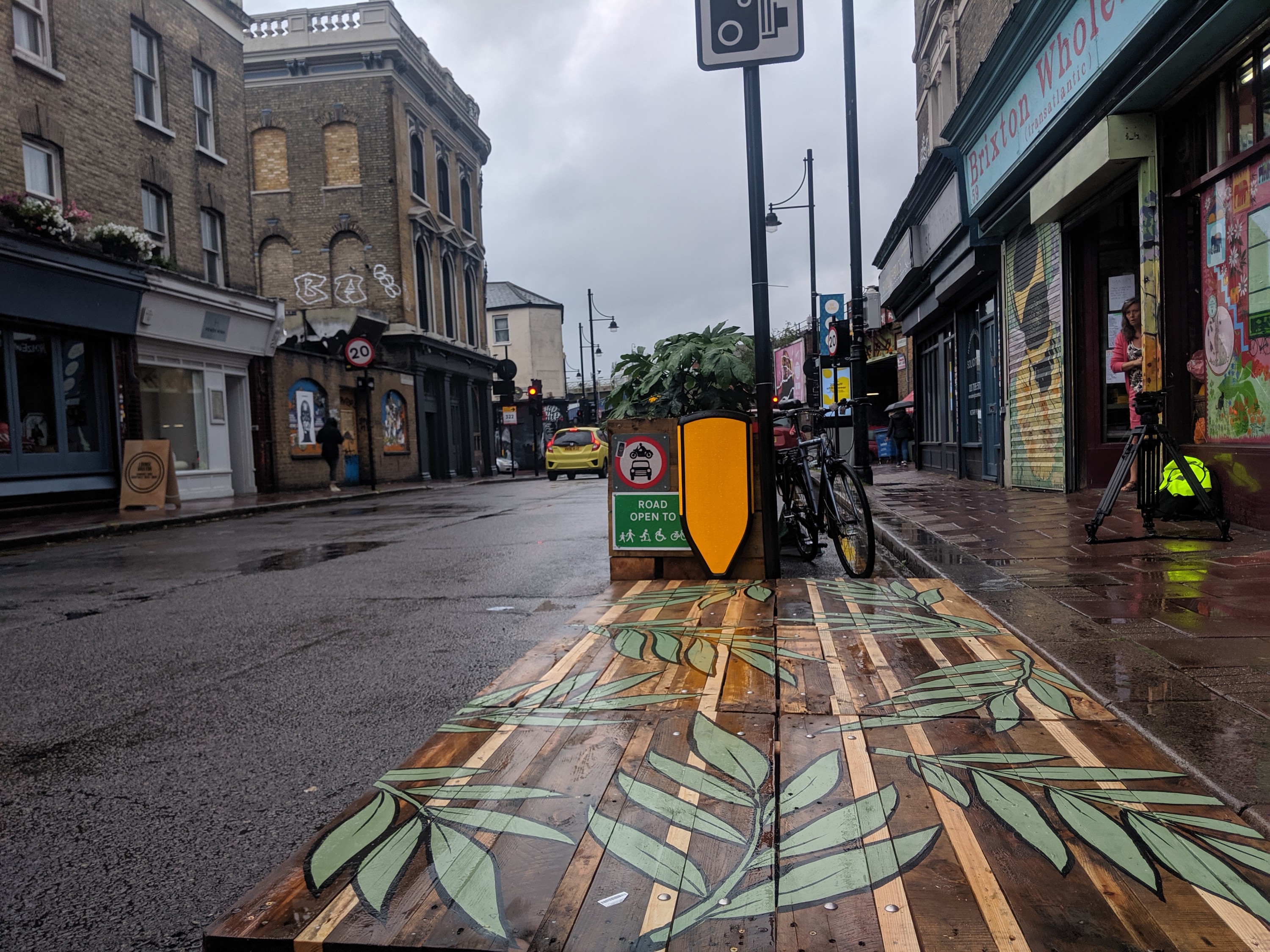 As Spin begins to expand into the United Kingdom, we are bringing with us our commitment to a holistic vision of more sustainable and people-friendly streets.

Our Streets team has been working with local safe streets groups throughout the U.S., and now, internationally, to help creatively transform streets into people-centered places for people to walk, bike, scoot, or otherwise get around safely.

In the UK, our Streets team has been building partnerships and planning projects for the past several months and our first collaboration has finally come to fruition — with more on the way. Spin partnered with Joel De Mowbray from Yes Make — a community-focused urban design shop — and Dennis Boateng, who runs an upcycling furniture shop called InUse-ReUse, to use old wooden pallets to expand the pavement and create more vibrant street space for people along Atlantic Road in the famous Brixton Market.

Long lines formed on the narrow pavement along Atlantic Road, since shop owners had to limit the number of customers going in. The local Council of Lamebth — the borough of London where Brixton is located — introduced road closures, partly for road works on Atlantic Road and also as part of the Council’s response to Covid-19, De Mowbray said.

This was part of a larger effort by London Mayor Sadiq Khan and Transport for London, the city’s public transport agency, to increase road and pavement capacity for people walking, biking, and otherwise getting around without cars or on public transport while also still being able to socially distance.

On Atlantic Road, the pavement remained narrow even though street traffic dropped and it occurred to De Mowbray that people needed more curb space. That’s when he thought of Boateng’s work repurposing and giving new life to wooden pallets, the same pallets on which the shops in Brixton received their shipments of goods.

“Riding through [the area] before lockdown, I saw businesses loading into their shops from pallets in the street. The pallets were perfectly the same height as the pavement,” De Mowbray said. “I heard about what Dennis was up to so got in touch to see if we could do something to widen the pavements using pallets.”

“Brixton is home,” said Boateng. “It was always going to be the first place to try this. The pallets we used were collected not even a mile from where they were originally used by businesses and then re-used to create new pavement space.”

Boateng called the idea of using these pallets, many of which would end up in the trash except for Boateng’s creative repurposing work, “a textbook example of the circular economy!”

It was around this time, De Mowbray said, that Kay Cheng, who heads Spin’s Streets team, reached out.

“Her guidance and support gave us the ability to properly test our idea,” De Mowbray said. “Without Kay’s help it probably would have been another one of those great ideas that just never happened!”

Boateng set to work preparing the pallets for their new life as pavement extensions.

“With pallets you need to bring the wood back to life and then start making it what you want it to be so it is double the work like that,” Boateng said. “Once the pallets were looking good, we added slats in the gaps of the pallets to make them into a proper platform and painted them with a tropical forest design. We bolted the pallets together in groups of six to create strong and stable platforms.”

Boateng’s workshop was close enough to the installation site that the team was able to transport the newly-minted platforms by cargo bike.

A major benefit of this particular project, De Mowbray noted, lies in its flexibility.

“These pallets can be taken out or moved as quickly as they can be put in. That allows flexible testing and the community can see and feel the change without steam rollers and tarmac coming in,” he said.

“In the long term we want to see these types of features and approaches used across every borough in London, as a first step to help local people and Councils test their design ideas and then move, improve, or make permanent,” De Mowbray said.