With Some Help from Spin, Better Block, KCMO Opens Its Neighborhood Streets to People 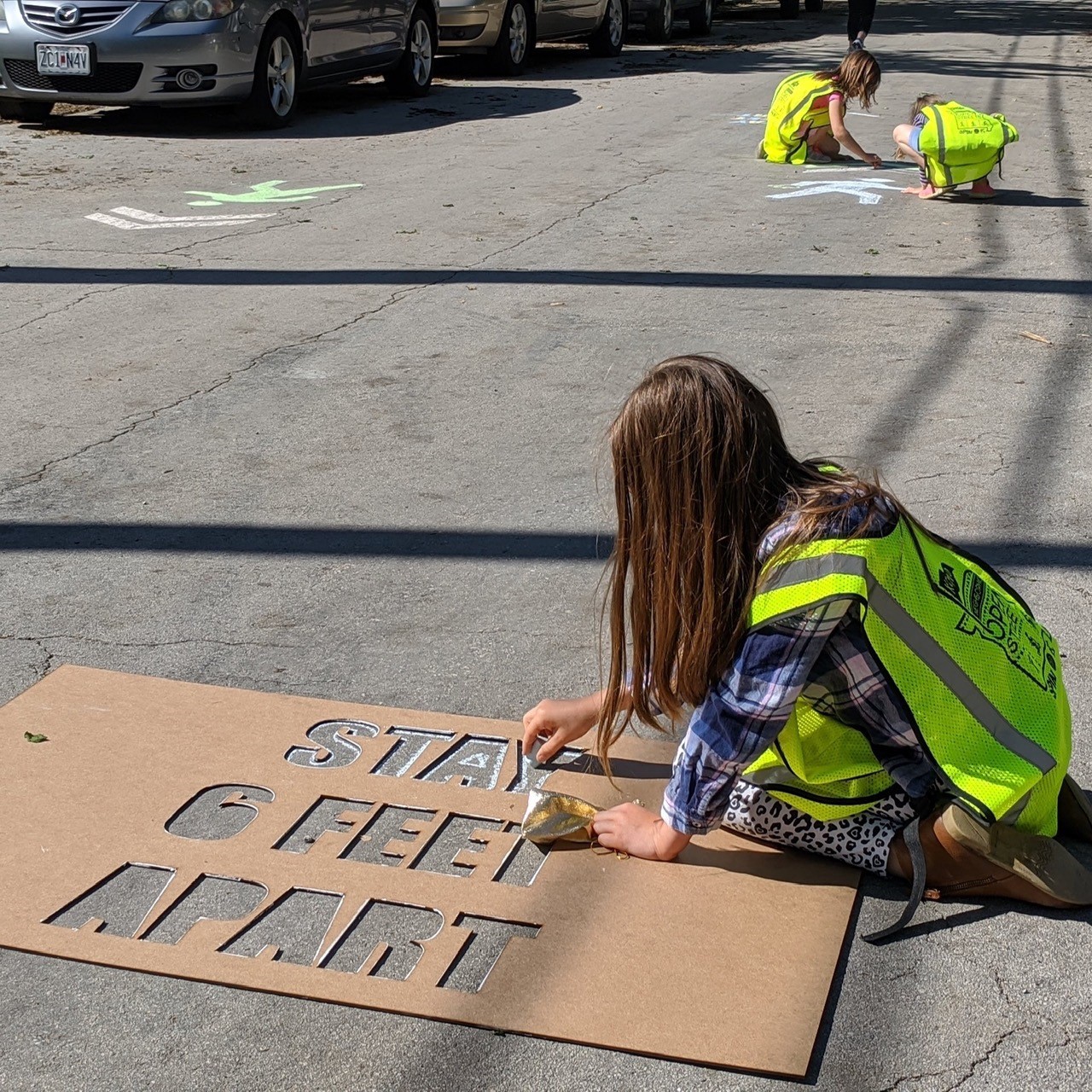 That’s when the City decided to look to its most abundant open space resource: city streets. In April, the Council voted to close four major roads to all but local traffic, make hundreds of stoplights more pedestrian-friendly by not requiring people to push a button to get a walk signal, and close roads in certain parks to cars. The KCMO Public Works Department also launched the neighborhood open streets permit, a unique initiative that allows residents in low-traffic areas to apply for a free permit to temporarily close their streets, and open them up for people.

Playing with wayfinding decor, provided by Better Block Foundation, in partnership with Spin.

“We really wanted people to be able to go right outside their house for exercise or fresh air, rather than drive to a park,” said Maggie Green, public information officer for Kansas City’s Department of Public Works. The permit is based on the City’s block party permit, modified to de-emphasize the party part. The City has expedited the processing and waived the fees.

“Usually, we’re looking to cities like New York and LA, so it’s been really exciting to see a city like Kansas City lead,” Green said of this approach, which is unique among major cities.

The program launched in late April. A month and a half later, nearly 20 permits are awaiting approval and eight have been approved. One challenge, though, was that the City simply didn’t have enough physical materials — barricades, cones, signs, etc. — to loan to neighborhoods to help them close their streets. That’s when Spin and the Better Block Foundation decided to see how we could help.

With the City’s resources being directed to the four major street closures, the Spin and Better Block Foundation partnership has “really allowed us to close that resource gap,” Green said. Spin is working with the Better Block Foundation to provide barriers, stencils, cones, and other physical materials needed to redirect non-local car traffic off of the neighborhood streets and show people where they can ride bikes, walk, and run safely. Residents can also request materials from BikeWalkKC to help facilitate their open street.

Walking, biking, jogging, skating. Local residents are able to get out and enjoy some fresh air while still maintaining healthy physical distancing practices.

“Exercise and getting outdoors go a long way in decreasing stress and promoting healthy living. The emergency Open Streets program accomplishes the goal of maintaining social distancing while also giving our residents safe space to get outside and be physically active,” Councilmember Eric Bunch, co-sponsor of the open streets resolution, is quoted as saying in the online “How-To” guide designed to help residents learn how they can open their streets.

When Kansas City resident Ryan Mott first got the permit through the Neighborhood Open Streets initiative, he had a DIY solution. He put some trash cans with sandbags at either end of the street to try to redirect traffic. He had noticed that after the stay-at-home order went into effect, drivers seemed to be cutting through their neighborhood more frequently, and driving faster than usual.

Installing barriers to slow down car traffic and to show that the streets are open to local traffic only.

“Our kids were restricted to playing on the sidewalk or the backyard,” Mott, who lives in the Old Hyde Park neighborhood. “People were walking, but there really isn’t enough room on the sidewalk to pass.”

Since his neighborhood received the open streets kit from Better Block and Spin, Mott has been able to better establish visual cues about proper physical distancing and that the street is closed to all but local car traffic.

“The stencils help to show people where to walk,” Mott said. He explained that he was able to take the stencils and, working with some of the neighborhood families, measure six feet apart and paint temporary demarcations.

Also, he was able to set up the barriers he received so that any cars entering the street have to slow down and drive through with an “S” maneuver. He also affixed “no through traffic” signs on the barriers.

Expanding the area available to the neighborhood as space for people has been very helpful as people continue to shelter in place.

“Two of my three kids learned how to ride their bikes without training wheels,” Mott said. And his neighbors have appreciated it, too, with some asking if it’d be possible to make these changes permanent.

Barriers let people know that the streets are closed except for local traffic only.

“We’re seeing a phenomenal amount of children riding bikes. People can walk their dogs and still maintain physical distance,” said DuRon Netsell, a principal at Street Smarts Design + Build and lead of the tactical urbanism collective, BetterBlockKC. He has been delivering the open streets kits to neighborhoods.

“This is really catalyzing a broader conversation. This open streets program, because of the resources provided by Spin and Better Block, we’re talking about closing other streets and creating space for people,” he said.

With the City set to relax its stay-at-home order Friday, what will become of the program?

“We’re going to keep all of these open streets initiatives in place for the duration of our emergency order,” said Green. While the stay-at-home order will be relaxed on May 15, the emergency order is currently set to continue into August. And the need for physical distancing will still continue.

“This is needed and people are taking advantage of the program,” she said.

Already, Better Block has begun analyzing what has worked — and what hasn’t — with its partnerships. And the partnership with KCMO offers some important lessons for how to create spaces for people quickly and efficiently.

A tiny scooterist enjoys one of KCMO’s neighborhood open streets.